Freedom of Speech and Capitalism in 2021: Interview with Noam Chomsky, Political Commentator

In this video The host and Founder of Qbix, Gregory Magarshark has invited as a guest speaker Noam Chomsky, a famous political commentator.

Noam Chomsky is also known as a writer, some of the well-known books he wrote are “The Abuse of Power and the Assault on Democracy”, “Manufacturing Consent”,” Profit over People”, and “Towards a New Cold War”.

In this interview, a lot of interesting topics were covered. Share your thoughts and opinions in the comments on some of the discussions that Magarshak or Chomsky brought up. 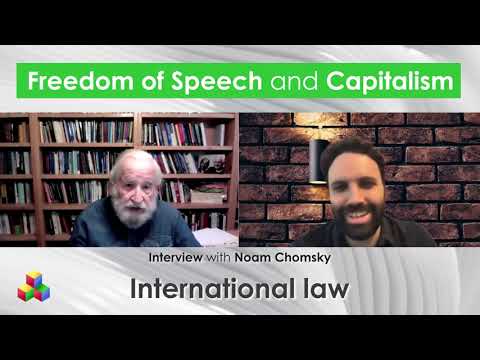 Timeline:
00:00 Intro
00:24 How do capitalism and free speech affect each other?
00:53 Is freedom of speech really guaranteed?
05:53 13th amendment and the bill of rights started that was applied to state cities.
07:46 Is there some kind of media that’s independent of five mechanisms?
17:15 What explains the UN’s slant?
20:27 International law
30:55 Why is Israel so special?
35:39 How the situation has changed since the introduction of the internet?
47:43 Can an open-source collaborative non-profit alternative media disrupt the mainstream media?

The interview starts with a discussion on how does capitalism and free speech affect each other. Is freedom of speech really guaranteed? Mr. Chomsky agrees with Gerg that free speech is not as guaranteed as it seems to be because if the government doesn’t like something that somebody says it can throw him to jail.

Another topic that is covered during the interview is International Law. They talked about what international law is, and what does it actually do? They dive deeper into topics related to countries like Israel, Pakistan, and Bangladesh. For example whether there was a violation of international law during the attempt to separate Pakistan from Bangladesh or not?
Lastly, they talked about what has changed since the introduction of the internet and what happened to traditional ways of transmitting news (Newspapers, Magazine, TV).

The interview concludes with a discussion on what it would be like to have open-source non-profit collaborative media, and can this kind of media replace mainstream media?

For answers to these questions, watch the full interview below.

If you want to hear more about similar topics, click the subscribe button and turn on the bell icon to not miss any of our notifications about upcoming videos!

Clips from the full interview are below:

Freedom of speech: Freedom of Speech in 2021! Interview with Noam Chomsky - YouTube

Freedom of speech and era of media: Freedom of Speech and the New Era of Media. Noam Chomsky Debate - YouTube

Capitalism on media: How has Capitalism affected the Media? Interview with the legendary Noam Chomsky - YouTube